Sing! (even if you cannot) – MediaShout Monthly Devotional (September 2021)

Sing! (even if you cannot)

For the director of music. With stringed instruments. Of David.

listen to my prayer.

From the ends of the earth I call to you,

I call as my heart grows faint;

lead me to the rock that is higher than I.

For you have been my refuge,

a strong tower against the foe.

I long to dwell in your tent forever

and take refuge in the shelter of your wings.

For you, God, have heard my vows;

you have given me the heritage of those who fear your name.

Increase the days of the king’s life,

his years for many generations.

May he be enthroned in God’s presence forever;

appoint your love and faithfulness to protect him.

Then I will ever sing in praise of your name

and fulfill my vows day after day.

In a few minutes, I’m going to ask you to sing.  Yes…you.  Techies.  Men and women who prefer to keep a low profile.  Folks who do not want their work to be highlighted, because that probably means you’ve made a mistake (Uh, could you please turn my mic on?  Why am I in the shadows?  Technology is great until it doesn’t work, amiright?).  Ugh.

But as we consider Psalm 61, it feels as though the Psalmist David is not only calling us out of the shadows, but he’s proclaiming that we who belong to God must sing…or at least make a joyful noise.

Every year gives us moments to remember, but since I was born in 1969, I’m partial to it…and oh what remarkable events took place!

The Beatles gave their last public performance on the roof of Apple Records…The Pontiac Trans Am rolled off production lines for the first time in history…350,000 Rock and Roll fans showed up at woodstock…and, of course, the landing of Apollo 11 on the moon, and Neil Armstrong walking on the surface of the moon.

But for me, there’s another event that took place in 1969 – November of that year, in fact – that resonates with me.  It was the premiere of Sesame Street on the Children’s Television Workshop and Public Broadcasting.

Sesame Street has been teaching children for 52 years!  Of all that they taught me and so many others, they also taught me this song, (its called “Sing” by Sesame Street) which has rattled around in my head for a half century:

Makes your heart happy, doesn’t it?

Psalm 61 is an 8-verse, full-body interaction between David and his God.

In verses 1-2, David seems to be expressing, “I, in my own strength, am not enough.”

Verses 6-8 are cries for God to sustain David to the end, and a statement that his (David’s) restoration will come from the hand of God, and will forever be his strength.

Sing that song…and watch yourself move from the shelter of his wings to soaring on wings like Eagles, running and not growing weary…walking and not fainting.

Now, before you leave this thinking to yourself, “Nobody wants me to sing.”  After all, perhaps it’s why you’re serving the worship team from “behind the scenes” so to speak.  Think again.  That word “sing” finds its roots in the Old English, Dutch and German languages.  Its original meaning is to chant, celebrate or tell in song. So, to sing, one needn’t have a spectacular voice.  To sing, one only needs a song. 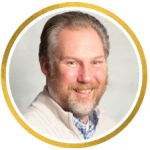 Chris Solwecki is the Director of Vineyard Kids at Vineyard Cincinnati.  He has also served as Director of Worship and Creative Arts at The Creek in Indianapolis, Indiana, and at Amazing Grace Christian Church in Grove City, Ohio, where he led teams on the platform and behind the scenes.  He’s married to Dedra and has 2 adult children.